Here’s what people are saying about Art Macabre Drawing Salons….

Director Nikki Shaill was interviewed on the BBC Radio2 Arts Show with Jonathan Ross on 4 May 2016, you can hear the interview online here (50 mins in) http://www.bbc.co.uk/programmes/b078x6vc

Jonathan Ross attended 2 of our events and said:

“I’ve been along to two Art Macabre events now and think what they are doing is very interesting.  was somewhat pleasantly surprised by the very broad range of people who attended. It’s not a judging environment, encouraging people to come and draw.

I can endorse it. It’s a very lovely calming and oddly meditative experience” 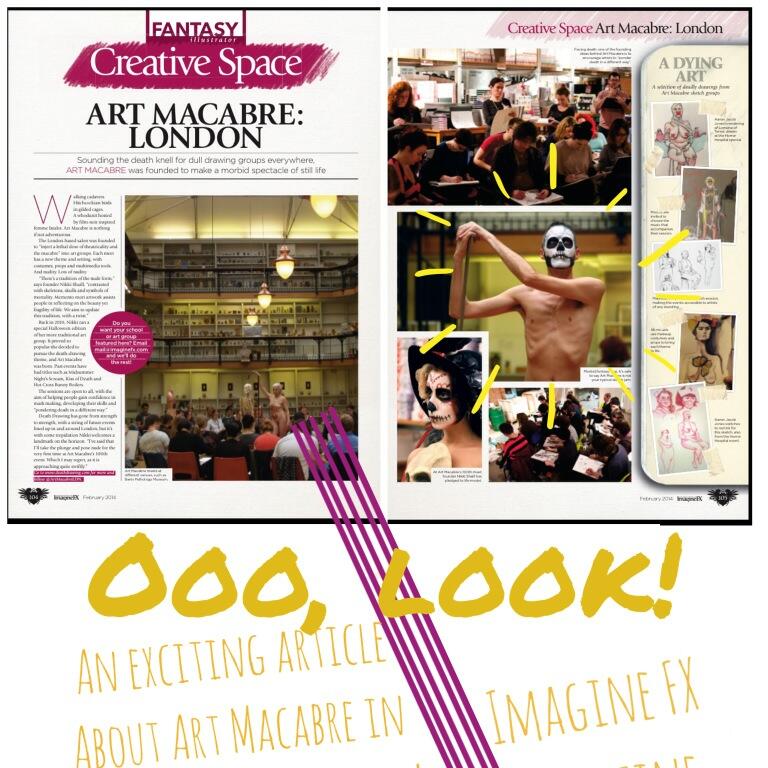 METRO Newspaper, London – DIY Arts and Crafts events in London feature,  http://metro.co.uk/2013/07/24/get-involved-diy-arts-and-craft-events-in-london-3895858/ Interview in Run Riot, Oct 2013, ‘Drawing Blood with Nikki Shaill’  Interview in BUST magazine online with Art Macabre’s Nikki Shaill. Nov 2013. LE COOL, on Dance of Death “You only have to casually stroll through the National Gallery to realise that artists through the ages have had a slightly strange fascination with painting tragedy and gore. From the rape of the Sabine women to the beheading of John the Baptist via the drowning of Ophelia, the subject and theme of death has always been cool on canvas. You might not consider yourself an artist or even vaguely arty, but that doesn’t mean you can’t draw, according to Raven Rouge and Lux DeLuxe, the creators of Death Drawing. Le Cool’s previewed them before, but they’re still too good to miss. In case you have, here’s a quick recap: they organise life drawing classes but with a macabre and theatrical twist every month. With materials provided for you by Cass Art, all you need is to sign up to indulge your melancholic and melodramatic side.” TIME OUT,FEB 2011- Critic’s Choice and Recommended Alternative Night Out “‘RIP boring life drawing classes’, these macabre artists say, who attempt to ‘resurrect’ the art of pencil to paper with a ‘lethal injection’ of theatricality and curiousity. We love it.” LE COOL, FEB 2011: “This is kind of one of those articles where I could just say the name of the event, followed by a full stop and finish it with a ‘go’. Death Drawing is like life drawing but about a gazillion times more interesting, especially if you’re like me and your drawings look like a blindfolded ape has done them. With an anti-Valentine’s Day theme, you can draw your ex’s beautiful blue eyes and then scratch them out with a good 5H pencil. To help with inspiration, although I’m not sure who might need it, there’s be bloody Valentine’s, burlesque and gory broken hearts. Now I will finish with a ‘GO’” HUEY MORGAN, BBC6 MUSIC “Sounds cool.” LONDON’S ARTIST QUARTER, BOW ARTS TRUST “Staid, boring drawing classes are so last century if we were to judge by the monthly drawing salon taking place behind those red velvet curtains. A little like your average drawing class with a twist and a lot more curiousity.” BALLAD OF have also kindly featured us on their beautiful blog Easel does it: offbeat life-drawing fun in N1 Posted Time Out Now. Here. This blog, February 25, 2013 in Arts & Entertainment There are plenty of places in London where you can stare intensely at naked people for an hour, and as a general rule, these are often best avoided. However, we’re making an exception for Cass Art’s new series of life-drawing events, where the naked flesh serves to stimulate mass-scale creativity, not shifty men in dirty overcoats. Taking place once a month at the art shop’s Islington flagship, the sessions – held in association with Art Macabre – each come in their own distinct flavour. To mark International Women’s Day, the next event (taking place March 5) is dedicated to feminist writer Angela Carter, so expect costumes, props and and set-ups to channel magic realism and gothic iconography. Then, on April 5, it’s ‘Hot Cross Bunny Boilers’ – a class themed around vengeful femme fatales. Expect growling.